A Eulogy for a Man I did not Know 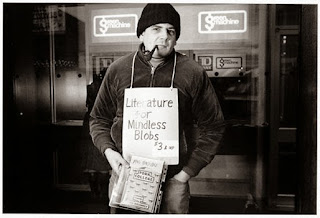 The passing of Crad Kilodney gave me pause to recall Toronto in the mid 1980s. He was a regular on Yonge Street when I worked at Charles and Bloor in Mr. Gameways Ark. I'd often pass by him while he smoked his pipe and carried a sign around his neck with some strange and interesting epithet on it. This was a time in my life where I desperately wanted to be "normal" (whatever that means). I grew up in some relatively challenging circumstances. Of course millions of people have it much worse than I did, but it did feel different than other youth in my immediate vicinity; and I didn't understand where many people were coming from. I had no concept of home ownership. I didn't really grasp the experiences of other people who had family members around them to support them (I just had my mum, who though very supportive, had a full plate). I always felt uncertain in the world. Of course many many 15-year-olds feel that way; but looking back on it, I'd still argue that being a mixed race kid in Toronto in the 80s, raised by a single immigrant mother living in subsidized apartment buildings wasn't the usual for Toronto, and especially not downtown Toronto. I think it was made odder by the fact that my mother had a university education and always expected—not demanded, but expected—me to go to university also. Perhaps in the more contemporary, postmodern, world we now inhabit this isn't at all strange. Nevertheless, I rarely felt anything other than an oddball growing up and I think this led to my overwhelming desire to have a life that more closely echoed the apparent lives of my peers. Now that I'm very firmly in middle age I sometimes wonder how my life would have been different if I'd had the courage to embrace my difference and do something completely original. The courage to be an outsider. I think this is the life that Crad chose. I never really knew the man, but it strikes me as a heroic decision to sell your own self-published writing to people on the street like a literary busker. In a way, he was the original blogger—except unlike a lot of the music, photography, and text today which is infinitely and perfectly duplicable, his work was finite and tangible. Rare items are now a rarity. Wikipedia says that material he created is now quite difficult to find. Kind of refreshing don't you think?
Posted by Zap Brannigan at 9:41 am

This is a Flickr badge showing public photos from holden99ca. Make your own badge here.